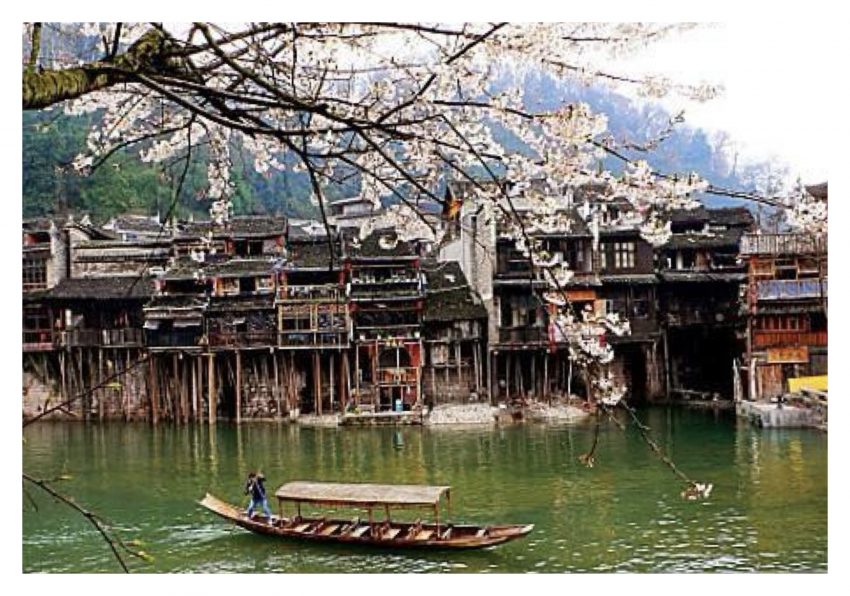 This essay has been published here in an excerpted version. To read the essay in full, please contact zimeng_li@emerson.edu.

I have always been cautioned not to learn Taoism either from my parents and my friends or even a Buddhist monk I bumped into on the street, because the process of learning was a bummer for whoever wanted to conquer this unknown realm. Taoists themselves even think words cannot be used to understand the Taoist philosophy because they are limited in scope to explain something invisible, something we cannot neither touch nor see, hear nor smell.
With the firm belief of “I will be the one to break the curse,” I did not believe a single word that was uttered from their mouth, both monks and Taoists. I soon got onto this journey of exploring the indigenous philosophical tradition of China and began dissecting Taoist texts like Tao Te Ching. As you could have imagined, the unsatisfactory results that I have learned from my “research” made me come to grips with the fact that not everyone can approach Taoism intellectually. The difficulty to understand it stems from its paradoxical nature that all of the material things in reality are based upon an invisible, impalpable, and ineffable principle on a spiritual level.
I am not someone who surrenders easily to something formidable, but is there a way to make sense of this mysterious oriental philosophy? In order to answer this question, I turned to literature and film, specifically works that utilize a simple framework for a Taoist model of the universe, that is, “The way begets one; One begets two; Two begets three; Three begets the myriad creatures” (Lau 42). This model teaches that all human beings ought to seek a balance between opposite forces of the spectrum and live in harmony with heaven and earth by following the natural course of everything. Examining this model through literature and film helps me make associations between Taoist principles and different aspects of human life that are not usually considered Taoist, which leads to a conclusion that Taoist thought permeates Chinese culture, and even to a greater extent, human civilization.

II. The Influence of Confucianism on Taoism

In the early twentieth century, a number of Chinese intellectuals started the May Fourth New Culture Movement (Lee 11). Influenced by modern Western thoughts and culture, they worked towards the goal of subverting conservative Confucian values that had been the ruling ideology of imperial China such as filial piety and subservience of women (Lee 19).
There are always two sides of the coin. The humanistic orientation of Confucianism that everything throughout the cosmos should be integrated and harmonized in an organic way complemented Taoism, an indigenous religion that developed a bit after Confucianism. Even though Taoist and Confucian ideas are not completely at odds with each other, they are different from each other in terms of selfhood and identity. In opposition to Confucian morality that imposes restrictions on humanity, Taoism offers a different view of contemporary life. In Tao Te Ching, Lao Tzu, the founder of Taoism, criticizes regulating society with moral standards of behaviors and encourages individuals to observe how the natural world works, follow the order and nature of the world, which ultimately leads to behavior that is appropriate and virtuous.

III. The Relation Of Taoism To Kung Fu in The Grandmaster

3.1 Kung Fu Philosophy Behind The Tao.
I once watched the film The Grandmaster with a group of college friends who are fans of Wong Kar-Wai, the Hong Kong director. This film manifests the elegance of Chinese martial arts, but it emphasizes less on the physical practices of martial arts performance than the internal and philosophical dimensions of kung fu. Its intention to achieve internal and external harmony echo with Taoist’s aim to live in harmony with the tao. According to Tao Te Ching, the classic Chinese Taoist text, since humans are so tightly bound to earth that follows the way of heaven, we should harmonize with the natural order, the tao, meaning “the way,” which is the fundamental principle of Taoism (Lau 25).
While most religions like Christianity and Hinduism emphasize the duality of human nature, Taoism embraces the unity of opposite forces, which is reflected in the concept of yin and yang. Our physical world is composed of opposite forces. We divide humans into male and female according to their biological sex; we praise the morality and fight against the evil; we experience light and dark with the rise and fall of the sun. Yet these dichotomies, male and female, good and evil, light and dark, are essentially conflicting, they can coexist and complement each other, as the universe is ultimately governed by balance.
As mentioned earlier, when practicing kung fu, in addition to balancing the flow of internal energy, it is essential to “achieve its external harmony.” By “external harmony,” I am referring to the resolution of any kinds of social conflicts within the society. In this case, it is the balancing of the existing dichotomies between the South and the North that breed two martial art skills, wing chun and bagua.
The film The Grandmaster begins with the arrival of the northern kung fu master Gong Baosen from Dongbei, who is seeking a successor from the South through a tournament. The protagonist Ip Man, who specializes in the wing chun style of kung fu in Foshan, southern China, squares off against Gong. However, rather than challenging Ip Man’s martial skills, Gong invites Ip Man to break a cake from his hand in order to test his mastery of kung fu. You may question how difficult it is to break a small, round cake. Yet to break a cake is not a serious task, the act of breaking it is an intellectual challenge, with no possibility of victory.

The battle between Ip Man and Gong takes place against the background of the Second Sino-Japanese War between Japan and China, a moment when it is crucial to unify the South and the North to take on the invaders. The cake is a metaphor that symbolizes the unity of China; therefore, breaking a cake signifies disunity. As the picture above indicates (fig. 1), Ip Man and Gong are holding the cake on its opposite poles, which resembles a flow of energy between yin and yang, an interaction between southern and northern martial skills. When Ip Man lets go of his hands, the cake crumbles by itself, because of the tremendous energy transferred between the two masters’ hands. At this point, the interplay between the yin and yang begets the harmony between the two disciplines of kung fu and evokes Daoist’s thinking that the complementary duality of yin and yang brings harmony to every facet of life. It is only through “carrying on [our] backs the yin and embracing in [our] arms the yang” that we attain the realization of tian ren he yi, an integration of the forces of heaven, earth, and humanity, which ultimately leads to the harmonious unity between nature and humanity (Lau 42). The graceful movements of kung fu showcased in The Grandmaster left me mesmerized the first time I watched it. On top of that, this film shaped my understanding of the representation of kung fu, which has expanded beyond a rigorous process of physical training and means of self-defense to the internal alchemy in accordance with the tao.

IV. The Impact of Taoism on Chinese Modern Literature

4.1 Historical Context of May Fourth’s Literature
In the May Fourth period, Western literary romanticized values, such as an emphasis on subjective experience, emotional feelings, and natural landscapes, were introduced to China. These Western cultural ideals had a significant impact on Chinese literature, which resulted in the achievements of literary modernity from traditional concepts of literature (Lee 11). A large number of May Fourth intellectuals, burdened with traditional values that had deeply rooted in their hearts, engaged themselves in the modern civilization. However, experiencing hypocrisy and alienation in the metropolis made them nostalgic for rural life. They found themselves caught up in a friction between the anti-traditionalism and the reminiscences of the rural culture, a conflict between the idyllic life and a modern lifestyle. This is how Chinese regional fiction, also called native-soil literature, was born (Lee 12).

4.2 Native-soil Literature
Native-soil literature is a literary genre in which a May Fourth writer, committed to liberalism and democracy, reminisces about their past and rediscovers the aesthetic assets of their native place (Kong 58). Shen Congwen has been widely recognized as an eminent writer in the native-soil literary tradition. Although he was critical of the social hierarchy, family structure, and education he received in his hometown of Xiangxi in West Hunan, which are all grounded in the Confucian doctrine, he wrote about Xiangxi with love and reverence in his imaginative novella Border Town. He reappropriates the traditional Chinese culture, the rural perspective in his native land, through fictionalization, and combines the traditions with the modernist desires for renewal and revitalization.
In Border Town, Shen practices the Taoist ideal of returning to the tao in his lyrical fiction. It is his intention to point the reader who has been lost in urban civilization in the right direction by advocating for a return to the simplicity of the authentic state of things. In addition to the depiction of natural scenery, Shen carries his aesthetic appeals of beauty and love to his characters’ virtues, where people are sincerely kind and helpful to each other. The central character of this novel is the old ferryman, named Grandpa, whose job is to paddle a ferry boat to ferry his passengers across the river. He is portrayed as a hard-working figure who regards his job as a duty. He is also morally upright, as he is reluctant to receive any money from his passengers. If someone gave him money for his hard work, he would “[come] up in an angry huff, [force] the money back into the man’s hand, and even [stick] a big wad of tobacco leaves into the merchant’s load” (Shen 46). His generosity and straightforward, open-minded temperament embody the good virtues of Xiangxi people. Shen is not merely creating a persona on page, Grandpa’s contentment with life speaks to the Taoism notion that the most effective action is inaction, also known as wu wei, which is a way to accommodate oneself and the society to the tao. In his essay “Daoism, Nature and Humanity,” Cooper refers to wu wei as “a form of life hospitable to the spontaneity” because “dao itself is a spontaneous process” (105). It is only through relieving ourselves from all the social constraints that we are able to develop our spontaneity, live in harmony with the tao, and find spiritual peace. Lao Tzu denies the enjoyment of consuming desires in Tao Te Ching: “There is no crime greater than having too many desires; There is no disaster greater than not being content; There is no misfortune greater than being covetous” (Lau 46). By using words like “crime,” “disaster,” and “misfortune,” Lao Tzu expresses his resentment towards materialism and reminds us that failing to suppress our desires is the obstacle to the pursuit of the tao.

Kong, Haili. “The Spirit of “Native-Soil” in the Fictional World of Duanmu Hongliang and Mo

First of all, I wish to express my sincere gratitude to my professor, Mary Kovaleski Byrnes, for showing her interest in my research and initiating me into the study of this fascinating yet challenging topic. Without her encouragement, I would not have had the courage and perseverance to tackle such an enormous subject. I am appreciative of Mary’s reading and commenting on an early draft of this paper. I am also grateful to Ashley Wells, for her support throughout my writing and for her guidance on the framework of this essay. Last but not least, I would like to thank my mom for her unfailing love and understanding.